"Crisis On Infinite Earths": That's why the crossover of "Arrow", "The Flash" & "Supergirl" is a party for DC fans 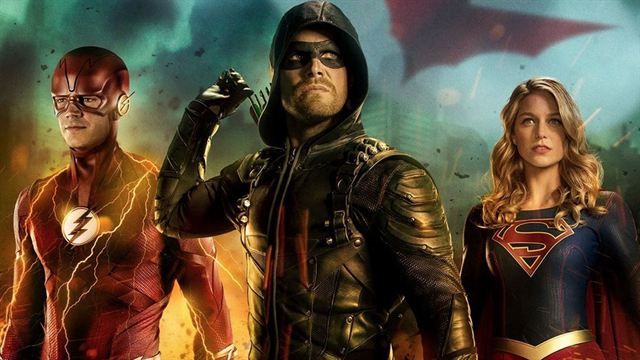 Even the Arrowverse crossover from 2018 was pretty crazy: Stephen Amell as The Flash and Grant Gustin as Arrow, a godlike creature testing different universes, plus the return of John Wesley Shipp as Barry Allen ...

For the next crossover, an adaptation of the legendary comic storyline "Crisis On Infinite Earths", the transmitter The CW but now drives up a similar: Five episodes will include the crossover, any current Arrowverse series - "Arrow", "The Flash "," Supergirl "," Legends Of Tomorrow "and" Batwoman "- so will contribute one episode, in which then, of course, all other characters occur. And the new information being released at the San Diego Comic-Con strongly indicates that we are in for a real highlight with "Crisis On Infinite Earths".

The crisis on infinite earths

With "Crisis On Infinite Earths", the confused and contradictory timeline of the first 50 years of DC comics has been unified and brought into shape. Within the story, the multiverse was attacked by a creature called the Anti-Monitor, who destroyed one universe and one earth after another and could only be stopped by the combined forces of heroes from various earths (and among great victims). And Anti-Monitor will also act as the main antagonist in the Arrowverse adaptation, as producer Marc Guggenheim confirmed at Twitter last weekend's Comic-Con weekend - played by LaMonica Garrett, who also designed the monitor, which is the counterpart of the Anti-Monitor. will embody:

And also a second important role for "Crisis On Infinite Earths" has now been filled, although this is likely to differ greatly from the comic book template. Because as revealed in the "The Flash" panel at the Comic-Con, serial veteran Tom Cavanagh will not just play a new version of Harrison Wells (a "saber-rattling adventurer") in the upcoming season "The Flash", but also the figure Pariah.

Pariah is responsible in the comics for the fact that the anti-monitor, which actually lives in its own separate antimatter universe, is first aware of the positive universe. Of course, he then immediately decides to destroy it. In the Arrowverse, Pariah is said to emerge from a "very, very big twist" that closes the storyline around the new villain Bloodwork and at the same time forms the prelude to "Crisis On Infinite Earths". So you can be curious ...

That Brandon Routh would slip into a Superman suit again for the crossover, was known before the Comic-Con. But now we also know what version of Superman he will play: When Routh was featured on the "Arrow" panel, Guggenheim revealed that unfortunately Routh could not be included in his "Superman Returns" suit.

Instead, Routh will apparently play the Superman from the acclaimed Elseworlds comic "Kingdom Come" - at least that's what the logo on the t-shirt suggests, as Routh revealed at Comic-Con. In "Kingdom Come," well-known DC heroes like Batman, Superman, and Wonder Woman return from retirement because their successor generation turns out to be incapable and irresponsible. However, even the old warriors are not in agreement with each other. To what extent "Kingdom Come" is adapted in crossover is not yet known.

In addition to Routh, another DC veteran for "Crisis On Infinite Earths" will celebrate his return: Burt Ward, who appeared as Robin alongside Adam West's Batman in the '60s, will appear in "Batwoman" as part of the crossover as announced on the Comic-Con panel. However, it is not known if he is actually playing Robin again or just completing a cameo.

Attention, there are spoilers for the fourth season "Supergirl"!

"Two And A Half Men" star Jon Cryer as Lex Luthor for season four "Supergirl" caused quite a stir, so many fans were surprised to find Lex at the end of season four of his sister Lena (Katie McGrath) was shot.

But the Arrowverse managers were of course a back door open: In the last scene of the season, namely, the monitor appears in front of Luthor's body and revives him apparently again. At least, this is indicated by the fact that Cryer will once again appear as Luthor as part of the Crisis On Infinite Earths crossover. This was revealed on the "Supergirl" panel. It would be conceivable that Luthor should fight side by side with the heroes against the anti-monitor, as in the comic book, but then does his own thing.

We will learn it at the end of 2019, then namely, the five crossover episodes will be sent on the US station The CW. The broadcast of the new seasons begins (with the exception of "Legends Of Tomorrow") in October 2019. In Germany Arrowverse fans can buy the consequences after broadcasting via VoD providers such as iTunes or Amazon.